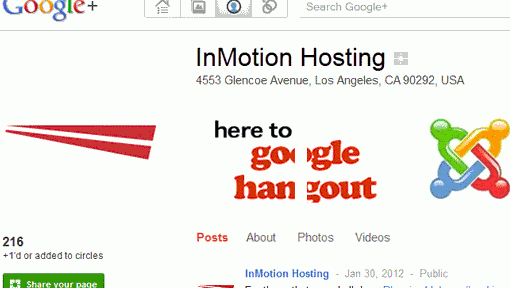 Google+ Brand Pages are going to be the new focus for marketers as they realize that this is part of the system that Google is weaving together to measure the relevance of online interactions between a brand and its audience.  In an effort just to make Google+ Brand Pages really pop and relay their message, I found a cool way to stuff more punch into the headline banner – by animating your Brand’s message.

You have about 15 seconds before someone is going to click off your brand page as they’re wandering through, so make sure you get your message across!  Notice that when you’re on the page, the header image takes up a significant proportion above the fold, and unless users click on the ‘About’ section, they’re not necessarily interested in absorbing your message.

I recorded on screen how I created the moving Google scrapbook, and created a video for those who wish to make their own Google+ Banner. You’ll find the template original file I used in the video to play around with in our web hosting resources. Here’s a note of warning: This video contains some pretty advanced Photoshop animation techniques! Although I walk you through step by step on how I’m doing this, if you aren’t familiar with setting up key framing you may find this video confusing. In any case, bear with it, you’ll find it’s much easier to learn these techniques by swapping out some of the layers and experimenting for yourself.

A number of things you’ll pick up in the video are:

So, check it out, this is how I animated and rendered a 5 segment motion banner – in 7 minutes. There’s a lot to take in, so it would help if you keep your eyes peeled by having the accompanying Google Plus Animation Template open with the video:

The following is a summary of the content covered in the video:

Photoshop has a control panel for animation, it’s hidden from plain sight within the Main Menu bar, look to ‘Window’ » and make sure ‘Animation’ is checked on.

You’ll need the ‘Move Tool,’ located at the top of the left hand toolbar, to affect positioning. Also, you’ll want the ‘Layers’ » ‘Opacity’ percentage setting [on the Right Hand Sidebar] to affect the fade on the timeline.

The layer I am demonstrating with is a text layer, so you can set your text tool and change to any message or font you want and preserve this effect that I have set up.

I also use the same tools to create ‘Bounce Effects’ on the falling icons. You’ll notice when I drop down the respective timelines on each of the layers, the key frames all follow the same sequence.

On each layer in the timeline window, you’ll see a drop down menu with key frame settings for adjusting the ‘Layer Style.’ Use this for creating ‘Punch-In’ effects by adding a small amount of glow at a point in the timeline, with the key frames on either side of that point set back to zero glow.

Drop down the animation timeline down for the layer you wish to work on.
In the video, I show you how to create for a subtle ‘punch’ effect as we drag the time frame over the active area in the timeline.

Use the ‘layer style’ navigator buttons

to move to the appropriate key frames you’ve set up.  Then adjust the the properties of the layer styles on each key frame by setting the size of ‘Outer Glow.’ You can take a short cut to the layer style settings by double clicking on the ‘effects’
bulleted sub-point, which is in the right hand ‘layer’ panel [it’s prefixed with an eye icon].

To create an any apparent lighting effect happening on your image or text layer, I like to use ‘Gradient Overlay,’ located within the layer styles settings. Using a small adjustment of just a couple of degrees alignment between two key frames, the angle of the apparent lighting will appear to shine.

How to Slice an Animated Banner for Google+ Pages

You’ll need to slice the wide aspect animation into 5 blocks for your Google+ page. Each block must be 150 x 150 pixels wide. If Google has to resize your images to scale in order to fit the scrapbook layout, your animation will be flattened to show only the first frame.

I also allowed a 15 pixel gap between image thumbs, so that the banner doesn’t appear to loose it’s proportion by strange offsets. I export the animation first, partly as a precaution for processing consumption – it’s sort of good housekeeping for your PC memory, but it’s also two birds with one stone to unify the frame length across every banner segment. What we want is to ensure is that upon web browser loading, all images must loop at the same time. So render a video then slice it because funny things tend to happen when Photoshop omits timeframes that contain object layers outside of your canvas, or leave out what it thinks are empty frames thereby staggering your banner loop.

With a new layer open, either as a new project or making use of the template with it’s guides, import your rendered animation. You can import this ‘video layer’ from an image sequence or avi file. Trim your canvas to 150 x 150 and ‘save for web and devices’ under » ‘File’ from the main menu. This is the tricky bit – creating your batch of 5 images is a repetitive process. If you want to be accurate, there is no fast way except by re-entering the » ‘Image’ » ‘Canvas Size…’ menu and extending your canvas to the right before trimming it back to 150 pixels in a two step process for each thumbnail you’ll want to render. Do not use the » ‘Image’ » ‘Image Size…’ option – this up scales your project rather than steps your canvas sideways.

So, obviously I tend to scrub all the advice I’ve just given you in favor of the quick way, and just eyeball it. I was figuring that the banner is small enough and in motion for only a few seconds that the odd pixel offset will be an unnoticeable difference. Using the template guidelines as a reference, I use the ‘Move’ tool which is the topmost toolset pointer, and simply drag the video layer over my canvas until it looks right and appears to match when I flip between different open tab projects.

Repeat the render for each image in sequence until you have a batch of 5 GIF animations to upload to Google scrapbook banner!