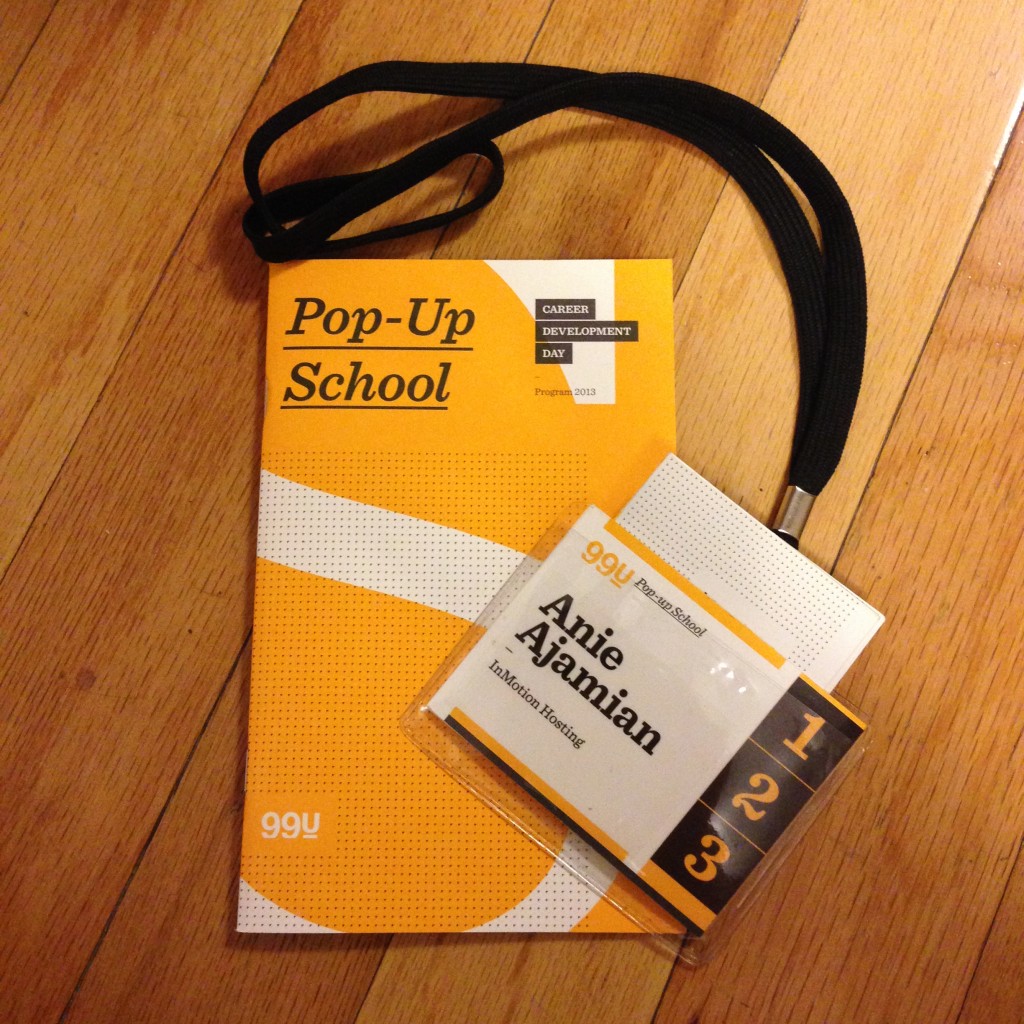 I was fortunate enough to fly out to New York City last month to attend the first ever 99U Pop-Up School held by Behance. Behance, which is huge in the design industry, is an online portfolio platform widely used by creative professionals. The purpose of the pop-up school was to enhance people’s skill sets and ideas for their personal or business development.

The event was broken up into 3 days; career development, entrepreneurship, and brand & digital strategy. The attendees consisted not only of designers, but of marketers and entrepreneurs as well. It was a great mix of people that all had the same values and passion, and they were either there to better themselves or impact their current or future companies. 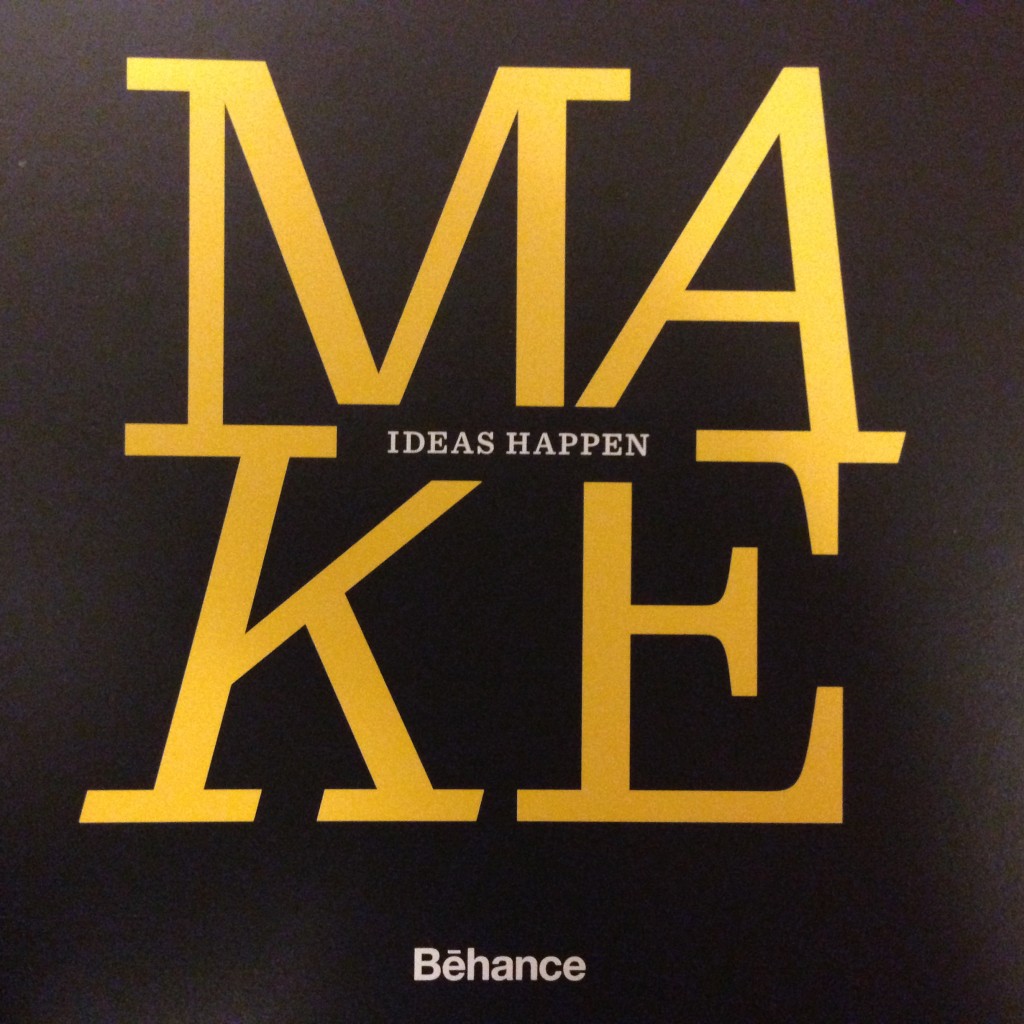 Not only did I get a chance to listen to many leaders from within the creative industry, as well as those who have become successful entrepreneurs, but I had an opportunity to interact with them. I joined round-table discussions with other people on topics such as how to launch your start-up. I got involved with mentor sessions and portfolio reviews with the people from Behance. And I watched their side stage where people in the audience would go up and practice building skills like pitching ideas to clients.

These were my biggest takeaways from the speakers of the event:

1. Self-awareness is the only sustainable competitive advantage.

Scott Belsky, Co-Founder & Head of Behance, discussed some interesting points about competitive advantages by asking two questions: 1) what do you want to be good at? and 2) what are you willing to be bad at? If you’re focusing on being good at everything, you’re not focusing on anything. For example, he brought up how Southwest Airlines decided to re-evaluate and change their focuses, and as a result they chose the opposite values of their competitors. They chose to focus on service and price, and gave the amount of routes and free snacks the back seat. Southwest Airlines is now the world’s largest low-cost carrier. In the past with the computer industry, design wasn’t important and variety was optimal. But then Apple decided to sacrifice the variety of choices and amount of distribution, and focus on quality, design, and fewer options. By valuing the opposites of their competitors, Apple captured their market.

2. If you look out for the people around you, you’re a true leader and you’ll inevitably be successful.

Simon Sinuk, Author of “Start With Why” & Leadership Expert, said “We put a premium on people who give us their time vs. money, because you can’t get time back. Good leaders are the ones who give us their time and energy.” If you want to accomplish great things, such as a successful start-up business, great leadership is required of you. You have to be empathetic, inclusive, open-minded, and help the people around you reach their highest potential. If you do this from day one, your company will thrive with loyal, happy employees and A-players. And you have to know the ‘why’ of your company. Great leaders can inspire movements by knowing the ‘why’ of what they’re doing. What is your cause and what is your purpose, and it has nothing to do with making a profit.

3. Building an impressionable brand and personality starts with the founders.

The best companies that are innovative, remarkable, and memorable, are the ones that stand for something, which is what keeps people loyal to them. The companies that are crystal clear about who they are and are consistent with their beliefs attract people who trust them. And that sense of trust comes from sharing common beliefs. Simon talked about how every decision we make is a piece of communication and a symbol of who we are. You have to say and do the things that you actually believe. This is why authenticity is so important. It’s how trust is formed. And with trust, we’re more willing to take risks and experiment. Sincerity is vital to building a brand. Customers can recognize fakeness immediately and become hesitant when they do. That’s why it’s so important to build a strong relationship with your customers from the get-go. A solid fan base is what makes successful start-ups grow so fast. Simon also mentioned how companies focus too much on themselves and not about what they are willing to do for the people. People don’t gravitate towards companies with a list of things they offer or are. They gravitate towards companies that value the same things they do. They don’t buy what you sell. They buy what you believe. Apple was just a computer company, but then they started selling mp3 players and phones. Why do we buy an mp3 player or phone from a computer company? It’s because we believe what they believe.

4. You win people’s loyalty with the little things.

Alexis Ohanian, Co-Founder of Reddit, said take advantage of opportunities on the most mundane parts of your website to surprise people, like the 404 page. Reddit lets users design these for them. People hit a low when they hit a 404 page, so take that opportunity to brighten their day instead. On Hipmunk, a travel website which is a sister company of Reddit, if people get the dates mixed up and enter for instance March 9 to March 5, the error message will say “We don’t yet support time travel.” Or if you search for a flight to Las Vegas on Hipmunk, it’ll say “Vegas, Baby!” Just that little bit of humor when people don’t expect it, catches them off guard and delights them. You make people feel like they’re a part of something bigger rather than just a website they type into their web browser. People are more drawn to things they feel a connection with. It’s human.

A web form building company called Wufoo built a strong connection with their customers the old-school way. Every Friday, everyone one in the Wufoo team, including the CEOs next to the interns and new hires, sits down and writes a hand-written note to its paying customers as a team building exercise. One customer took a photo of their note because they were so surprised by it and they uploaded it to Flickr. People want to share this stuff because it’s so novel and they can really appreciate it. A personal touch, like hand signing a letter at least, goes a long way. Be grateful and helpful without selling yourself. That’s how you build genuine relationships with people.

5. Not everything has to have a business objective.

Jonathan Perelman, VP of Agency Strategy of BuzzFeed, said we need to engage, bring value, be human, and give real storytelling. We don’t have to correlate everything with making money. You have to give before you can expect something in return. Create content that people want and will share, and that you are proud to share, because content which is essentially storytelling, is part of your identity. Be authentic. A product can be copied, but a story can’t be. Neil Blumenthal, Co-Founder of Warby Parker, said, “If someone is copying you, they’re always going to be two steps behind.”

With all this in mind, you should be on the right track for a successful personal brand, a new start-up, or even a current business you’re looking to turn around. Remember your ultimate goal is to make your customers and the people you affect happy. So make everything about them, not about you.