So I just got back from WordCamp Miami, held the past weekend at Florida International University. It was one of the best, most well organized WordCamps I’ve ever attended. Kudos, to a new friend David Bisset for organizing such a good event.

We arrived in town on Thursday. Unfortunately, layovers pushed my flight back enough that I missed the South Florida Meetup social event. I was more than disappointed that I couldn’t make it. If it was anything like the actual WordCamp, I’m sure it was amazing.

Friday night at the speaker/sponsor dinner which was held at BJ’s Brewhouse, we caught up with some old friends like Nikhil. At 15, he’s really a bright up and coming star in the WordPress community. You should watch for big things from this kid.

We also met up with Syed from WPBeginner. While he’s been a friend of InMotion for some time, I’ve never met him until now. He’s a super nice guy. We also caught up with Rami from WebDev Studios. I got introduced to him at WordCamp Lancaster. I was surprised he remembered my name to be honest. It was impressive and speaks to the type of guy he is. I caught up with a dear friend, Michele Butcher. If you haven’t heard, she’s one of our WordPress Evangelists for events like WordCamps.

We called it a night after I grabbed my swag for speaking. As usual, WordCamp Miami didn’t disappoint with a computer tote, a watch (yes! a watch), some snacks, and the coolest deck of playing cards. The playing cards all had WordPress functions on them with an example. Someone spent some time planning those out!

Saturday Morning arrived early. I have to admit South Florida is beautiful in the morning (at least before it becomes sweltering hot and sauna-like). We headed over to the campus and got set up. Mike, Jason, and I spent the day talking to some really great people at our booth. We had some of the coolest swag too. Where else can you get a USB hub and post-it holder? Of course, from us!

Lunch was chicken and ribs with all the sides. It was pretty tasty. The most impressive feat was they fed all the attendees (somewhere around 800) without too many hiccups. I know from years of catering, feeding 800 people is no small task.

Off to the afterparty at Dave and Busters. We didn’t stay long, and after some great conversation and a few games of pool we called it a night. After all, my team mates were flying out in the morning and I had to still wrap up some preparations for my talk “Growing your Non-Profit with WordPress”. If you want the slides for my talk they’re here.

Part of my talk is about Give, a donation plugin. I use it and actually really like it. It’s easy to use and the developers who built it, Matt and Devin are easily accessible. I got to meet both of them on Saturday. I’m glad too. I was able to use them as an example when I speak. Where else could you have access to the developers of a plugin so easily?

@VA_SEO_Labs of @inmotionhosting highlighting some really great features of Give for non-profits #wcmia #WordPress pic.twitter.com/1cIti03XuJ

After my talk wrapped up, I was quite surprised by the amount of questions I received. I’m hoping I was able to help some of the non-profit community with my 30 minute talk. It’s awesome to know I am a part of the WordPress community which is one of the most close knit groups I’ve ever encountered within techonology.

Oh did I mention, I have my own trading card too! How freaking cool is that?! It’s uber nerd status as quoting my friend Scott. 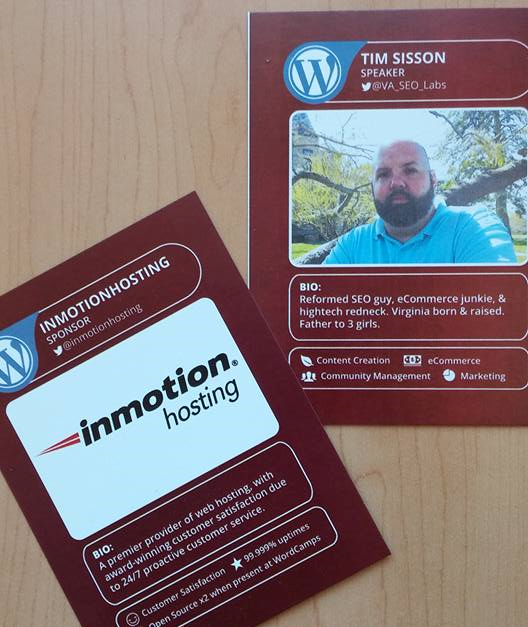 I have to say, thanks to the WordCamp Miami organizers for putting on another amazing event. Thanks to all the new people I met and the old ones I got to catch up with. This won’t be an event I soon forget!

See ya later #WCMIA so much fun hanging out doing #WordPress stuff see you next year!