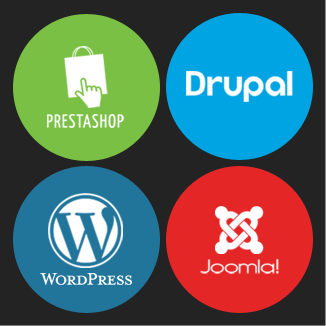 PrestaShop is one of the fastest growing e-commerce solutions in the market. Prestashop is incredibly user friendly and has a great interface that makes it much easier to setup and manage than some of the traditional platforms like Opencart. With support and technical help available from all regions of the world, PrestaShop has quickly gained a reputation as an all in one e-commerce provider.

The most unique aspect of the Joomla CMS is the way in which the organization is structured. The Joomla! Project takes into account everyone’s feedback and tries to develop Joomla with all the users/developers in mind. Therefore, virtually anyone can become an integral part of the project by just contributing. Whether it’s code, sponsorships, or helping out in forums, you become a true community member from the first day you join. With most of the other CMS platforms, there is usually a straight hierarchy or a chain of command where decisions are made on what features/components/versions to develop next. With Joomla!, that is decided upon by all the users and developers involved. This can make processes a bit longer to complete, but it ensures that everyone’s feedback is taken into account. From an end user perspective, there is definitely a higher learning curve with Joomla! than say WordPress, but the people who are devoted fans say it is the best out there.

You may be surprised that the many of the websites that you see on the internet actually use WordPress.  Originally intended as a blogging platform, WordPress has extended its functional reach through continual development and thousands of plugins – many of which are free.  These plugins allow the application to handle website needs such as image galleries, ecommerce shops, and forms – to list a few.  It is often classified as a CMS (Content Management System) because of its flexible nature. Add to this the many thousands of themes that allow you to quickly change its appearance and it’s easy to understand why WordPress is the most used open source application on the internet.  WordPress is easy to use and there are many avenues of support including many tutorials in the InMotion Hosting Support Center. Check out WordPress and you’ll find out why it is the top solution for your website building needs.

Drupal is one of the most popular content management systems online. Drupal is the oldest of the Big 3 (WordPress, Joomla, and Drupal), being established in 2001. It is an open source application that is built upon PHP and MySQL. Drupal was conceived as an enterprise system and powers websites like Whitehouse.gov. Drupal has several advantages that make it a power player in the CMS community. It is extremely flexible and can build anything from a small blog to an enterprise level site supporting millions of users. It was built to be search engine friendly from the very start. The Drupal software is very stable and can serve thousands of users at the same time. It is also very developer-friendly, and developers can easily create their own modules and custom solutions.