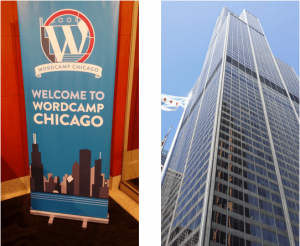 This past weekend, I got to do two things I’ve been putting off for awhile. Visit Chicago, and go to a WordCamp. I’m glad I finally did, because I got to see an awesome city and meet a ton of amazing people that help make up the close-knit WordPress community.

On Friday, we started exploring the city and ended up seeing the Cloud Gate (also known as “the Bean”) in Millennium park that showed off the city skyline in a very unique way. The architecture of Chicago was simply stunning and I was in awe just walking around it.

There was a Blues festival, as well as the Chicago Electronic Dance Music Festival going on, so the city was packed with people, and the weather was beautiful. I had a lot of fun exploring the city, but was even more excited to start digging into WordPress.

After asking the locals, both Lou Malnati’s Pizzeria and Portillo’s Hot Dogs were the unanimous places to go for authentic Chicago style deep dish pizza, and a hot dog. Neither place was quick, and they were both packed, but man the food was worth it! 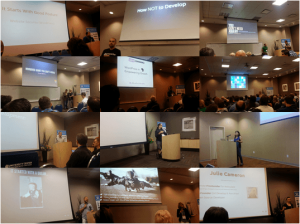 I was looking forward to some great WordPress talks. I’ve seen quite a few online, but being live in the same room as the speaker made the info resonate with me even more.

At WordCamp, they split talks up into 2 or 3 tracks, so you can’t listen in on every single one. With the ones I saw, I gained some useful knowledge from every single talk.

WordCamp Chicago was a great time and I learned a ton, I also met some great people and I’m sure I’ll bump into them again at future WordPress events. Going to my first WordCamp and seeing the WordPress community up close in person has really opened my eyes to all the possibilities that WordPress allows for. I really appreciate InMotion Hosting sending me out there to bring some of that great community back to our ranks.

If you have a chance to go to a WordCamp and you’re putting it off like I had been, do yourself a favor and dive in! If you happen to join the great learning and networking experience that is WordCamp, let me know! (@JacobsLadd3r)