I had the privilege and opportunity to attend the WordCamp party in The OC last weekend. The party started on Friday night and didn’t stop until Sunday night. Along the way I learned a lot about life, love, and the proper maintenance and structure of WordPress plugin directories.

I arrived in Costa Mesa a little late for the opening event at Rancho San Joaquin Golf Course. This was my very first WordCamp event and I didn’t know anyone there. I was nervous to say the least, but that was fixed by Jeffrey Zinn (@jeffreyzinn) rather quickly. Let me first say, what an amazingly friendly and welcoming group. I felt right at home in no time. Jeff has a way of making you feel relaxed and comfortable in just a few words. I ended up meeting several people that night. Shortly after Jeff I met Chris Lema (@chrislema). Everyone was gathered around this guy and with good reason. Ridiculously intelligent and really funny, I don’t care what Jeff Matson (@thejeffmatson) says.

Be Yoda, not Luke. -Chris Lema. Getting life lessons at #wcoc pic.twitter.com/QGy7ZRFEZS

I also met the Chuck Norris of PHP programmers, Dave Jesch (@davejesch). Dave Jesch doesn’t use a debugger. His PHP code is too afraid of him to develop bugs. I also met several other speakers and organizers.

The camp itself started the next morning. I got into the show a little later than I wanted, but ran into Sash Ghosh (@liferhymes) on her way out. It was great to see a friendly face before getting into the show. The show was nice and cozy. The one thing the OC WordCamp people do is lay out a nice spread. 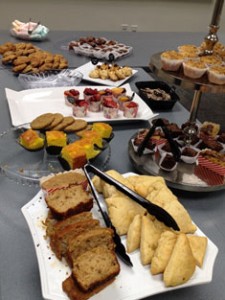 After getting some great snacks I immediately moved to one of the two main speaking rooms. The first presentation I heard was by Carrie Dils. It was titled, “Learning to Troubleshoot WordPress.” I learned a bunch of great pointers from the speech. The slides are here .

The most mind blowing presentation of the day was by Dave “Chuck Norris” Jesch. He went into hard core PHP optimization. You can see the slide here.

He explained the difference between built in functions that run in native C and slower ones that a user builds in PHP. One thing to note about Mr. Jesch, all the code he writes is object oriented, even when he programs in Basic.

Dave Winter (@dauidus) would give the most helpful presentation. His slides are here and his video is here.

He spoke about how to customize the WordPress Admin area to prevent clients from FUBARing all of your hard work. He had me laughing and thoroughly entertained during the whole speech. Going forward, his information will save me more lost time than anything else I learned at the show.

That night I went to an Irish Pub called “Durty Nelly’s” so I could attend WordCamp OC’s after party. Jeff, being the awesome guy that he is, was waiting by the door with free drink coupons. I ran into a nice chap named Glenn. We are of similar generations and got to talking about the good old days. Out of nowhere I heard Dave Winter say, “Old people are fun.” The three of us started talking when Blair Williams (@blairwilli) walked up. It was truly wonderful meeting him. Not only is he a great guy, he is the maker of many a useful WordPress plugin which I will be using going forward.

The next day was my speech. Being my first speech I found myself pretty nervous. Still I couldn’t wait to get to it. First though was lunch. On both days WCOC brought in food trucks. Truly a yummy decision.

Now that lunch was finished I watched a presentation going over integrating social media into your WordPress site. This is an area that I’m very weak at and really appreciated the info. I strongly recommend checking out Sarah Wefald’s slides.

Finally it was time for my presentation.

The title was “A WordPress Site Even Your Mother Can Use.” The presentation covered setting up an easy to administer WordPress site for the non tech savvy. The slides can be found here.

My speech was the last of the day and was followed by closing remarks by Jeffrey Zinn. Afterwards I had dinner with Dave Winter and Dave Jesch. One of Dave Winter’s students showed up as well. We talked about every subject imaginable.

It was a really great end to a great show. I would like to thank everyone involved with WordCamp OC (@ocwordcamp)! I had a blast and look forward to other events going forward.