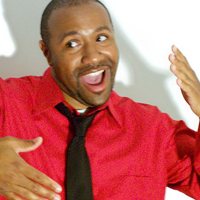 My very first, and coolest, Pro gig in the Web Hosting field. With many freelance positions and staff positions from The Red Cross to Hulu I decided to take my talents to SoCal! InMotion Hosting welcomed me with open arms and the rest… as they say… Is HISTORY!

Been at the company since:
Just made 1 year… You know. Creepin’ on the come up.

How did you get started in the web hosting field?
Well actually this is my true ‘start’. IMH is my first hosting company. During my career I’ve done a lot of web design, web animation, changing and fixing this and that but IMH is my first actual hosting gig. So as far as stepping into this role, I saw the ad for the position, saw how close it was to my house and applied! lol. Honestly, I thought it was a good fit. After finding how cool the office and atmosphere was, I believed that not only could I learn a lot from my position but that I could also contribute a lot to the company.

Coolest gadget you own, want to own, or have read about?
I love getting new equipment so my coolest gadget right now is this video/lighting bracket that I just picked up (shouts to amazon, lol) which allows me to stack an ungodly amount of tech on one mono/tripod. Next? Who knows… I’m gonna build a Mac Pro soon.

What would you like to tell us about yourself?
I got skillz. With a ‘z’. Yeah… That’s it. But really tho…. I just love creating and making new things. Trying to keep it flashy, stay fly and show a bit of flair. That’s why I’m here.

Describe your personality in one word
Fresh.