I recently had the pleasure of visiting beautiful Portland, Maine for the first ever WordCamp Maine. Living in the city for so long and only traveling to large cities for WordCamps, I wasn’t sure of what to expect with a brand-new WordCamp out in the middle Maine. Well, to my surprise, it was an amazing trip full of wonderfully knowledgeable individuals who truly cared about WordPress as well as open source software.

Being a smaller WordCamp, I felt as if it was much easier to connect with people a lot closer than other WordCamps I have attended. If you have attended larger WordCamps in the past, you may have found that there are usually somewhat of common people that hang out together. Of course, absolutely anybody is welcome to walk up to whomever they want and strike up a conversation, but groups are sometimes formed that can discourage new folks in the community from talking to the big name “circuit speakers”. What I felt at WordCamp Maine was exactly the opposite of that.

Typically when I attend a WordCamp, I go with an agenda of who I want to speak with and the particular topic I want to discuss. At this smaller WordCamp, my approach was to wander up to absolutely anybody and strike up a conversation. From the very moment I arrived at the speaker/sponsor party to the very end of the day Saturday, I was constantly asking people what they did with WordPress and what they are currently working on. Sure, it may have been a bit strange to some for someone to randomly approach them and ask them about their work, but learning more about everyone’s jobs and upcoming projects was well worth it bit of creepiness I could have possibly portrayed.

As I had not seen Chris Wiegman of iThemes Security since WordCamp Miami, and he was arriving a bit earlier as well, I saw it as a perfect opportunity to connect with him. After a few text messages back and forth, we took a short walk (that felt like an eternity uphill) to downtown Portland. There, we decided to grab a bit to eat and chat about WordPress, airplanes, and stray cats for several hours before we had to head over to the speaker/sponsor party. Walking the city of Portland was never on my bucket list, but it was certainly a pleasure. 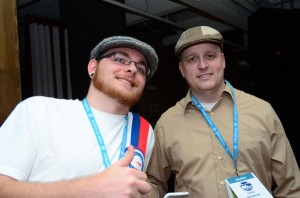 At WordCamp Maine, I had the pleasure of being part of an incredible group of speakers, and bowling alongside them as well at Bayside Bowl. If bowling skills had a direct correlation to WordPress development/design skills, I think we would all be in some serious trouble.

The organizers had the right idea when they decided to encourage people to randomly bowl together so that everyone would be almost forced, in a sense, to talk to people whom they don’t know. It certainly broke the ice well and led to some great camaraderie between individuals who may even be business competition.

Overall, the speaker/sponsor party was a great success and I highly encourage other larger WordCamps to encourage conversation and teamwork from the very beginning just as well as WordCamp Maine did.

Just a quick walk from my hotel was WordCamp Maine, located at the Maine College of Art. I especially loved they layout of the WordCamp in which most would walk by the Happiness Bar and it was very open and inviting. As the majority of my memorable discussions occur at the Happiness Bar, that was my direct target.

“if your a member of a community, and one day you stopped showing up… people should miss you.” #wcme14 pic.twitter.com/6Sq2v7b9vw

At WordCamp Maine, the keynote was John Eckman of 10up, one of the largest WordPress development and design studios out there. In his keynote, John discussed his roots and the community spirit of the open source community, especially WordPress. It was quite possibly one of the best keynotes I have been to recently due to the direct connection I have with the WordPress community and its impact on me both personally and professionally. In some way, WordPress has shaped our lives and John did an excellent job in describing that feeling.

@TheJeffMatson keepin it real re: what to consider when finding a great host. “Do your homework and research” #wcme pic.twitter.com/VVBdSiLhuS

I spoke at my typical 3:00PM time slot on choosing a WordPress host. As it was a smaller WordCamp, it was a smaller crowd which was nice as I was able to read everyone a lot better and determine where more emphasis may need to be placed. I felt like the audience certainly learned how to better choose a host for their WordPress site in an unbiased manner.

After speaking, all speakers are highly encouraged to sit at the Happiness Bar for an hour to further discuss any topics that may have been left out. During that time, I had the pleasure of meeting Jeff Ackley who is heading up the Ecosite Competition which is an effort for developers to provide websites for eco-friendly organizations. We were able to have some great conversations about eco-friendly datacenters and helping the environment as developers as much as possible.

Why WordPress Maine was awesome

Firstly, no WordCamp can be a success without the organizers that give their lives to it, the volunteers who work hard to keep things running smoothly, the speakers for providing excellent subject matter, and the sponsors for footing the bill. A big thanks goes out to all of you for working so hard to make the very first WordCamp Maine such a success.

WordCamp Maine was a great approach towards bringing people together, regardless of their status within the community. I feel that the organizers worked especially hard to keep a large amount of diversity within the group. As WordCamp Maine grows, I hope to see those values continue through many successful years.

I had a great time speaking at WordCamp Maine and hope to see you all next year!