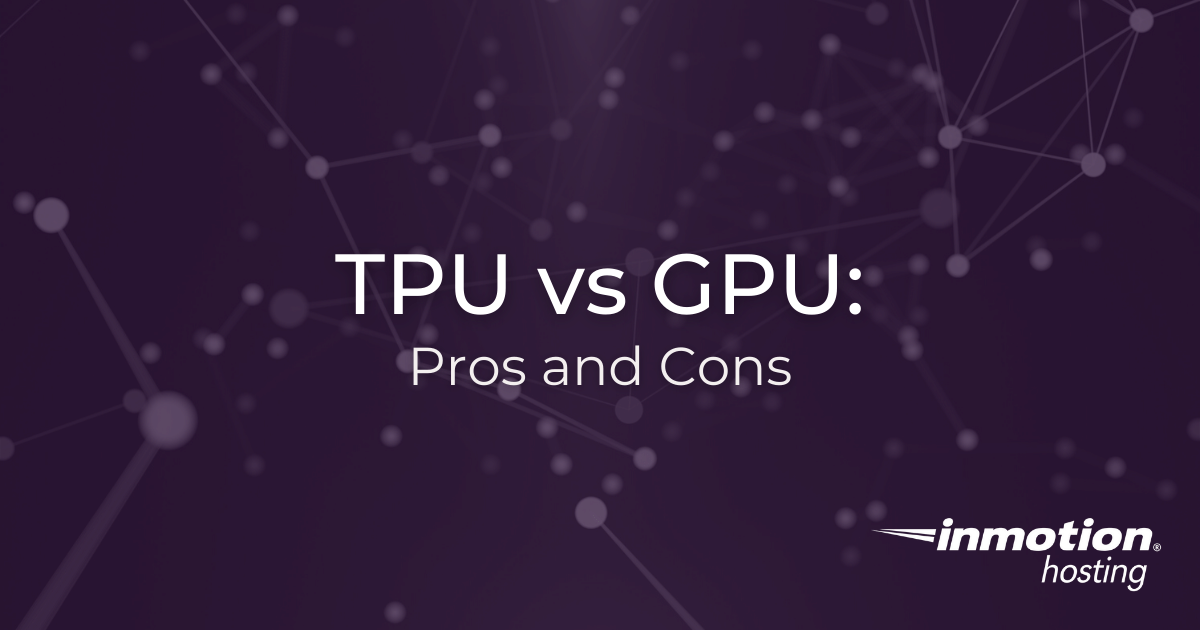 TPU vs GPU, which is better for you?

As artificial intelligence (AI) continues to increase in popularity, there is a lot of buzz around TPUs and GPUs.

A lot of people compare TPU vs GPU, but the two are very different components.

In this article, we’ll tackle TPU vs GPU by covering what exactly TPUs and GPUs are, what they do, and the pros and cons of each.

GPUs were originally designed and used for 3D graphics to speed up things like video rendering,  but over time, their parallel computing ability made them an extremely popular choice for use in AI.

How Do GPUs Work?

GPUs work via parallel computing, which is the ability to perform several tasks at once. It is also what makes them so valuable.

GPU parallel computing enables GPUs to break complex problems into thousands or millions of separate tasks and work them out all at once instead of one-by-one as a CPU is required to do.

The parallel processing ability makes GPUs a versatile tool and great choice for a range of functions such as gaming, video editing, and cryptocurrency/blockchain mining.

It also makes them perfect for AI and machine learning, which is a form of data analysis that automates the construction of analytic models.

This is because the modern GPU typically contains between 2,500–5,000 arithmetic logic units (ALUs) in a single processor which enables it to potentially execute thousands of multiplications and additions simultaneously.

One caveat about GPUs is they are designed as a general purpose processor that has to support millions of different applications and software. So while a GPU can run multiple functions at once, in order to do so, it must access registers or shared memory to read and store the intermediate calculation results.

And since the GPU performs tons of parallel calculations on its thousands of ALUs, it also expends large amounts of energy in order to access memory, which in turn increases the footprint of the GPU.

GPU is currently the most popular processor architecture used in deep learning, but TPUs are quickly gaining popularity for good reason.

TPU stands for tensor processing unit and is a designated architecture for deep learning or machine learning applications.

Google began using TPUs internally in 2015, and in 2018 they made them publicly available to others.

When Google designed the TPU, they created a domain-specific architecture. What that means is that instead of designing a general purpose processor like a GPU or CPU, Google designed it as a matrix processor that was specialized for neural network work loads.

By designing the TPU as a matrix processor instead of a general purpose processor, Google solved the memory access problem that slows down GPUs and CPUs and requires them to use more processing power.

How Do TPUs Work?

Here’s how a TPU works:

The output from these steps will be whatever the summation of all the multiplication results is between the data and parameters.

No memory access at all is required throughout the entire process of these massive calculations and data passing.

TPUs are extremely valuable and bring a lot to the table. Their only real downside is that they are more expensive than GPUs and CPUs.

Their list of pros highly outweighs their high price tag.

TPUs are a great choice for those who want to:

In the battle of TPU vs GPU, it really comes down to what you need a GPU or TPU to do, and the budget you have available for your project.

When it comes to AI, deep learning, or machine learning, both GPUs and TPUs have a lot to offer.

GPUs have the ability to break complex problems into thousands or millions of separate tasks and work them out all at once, while TPUs were designed specifically for neural network loads and have the ability to work quicker than GPUs while also using fewer resources.

If you are comparing one to the other and debating which one you should use, let us find a custom solution tailor-made to fit your needs.

Cost-effectively supply cloud resources at scale to your company and customers with Hosted Private Cloud, powered by OpenStack.

Sam is a Content Marketing Writer at InMotion Hosting. He covers a wide range of topics but focuses primarily on WordPress, thought leadership, and help articles for bloggers and small businesses.