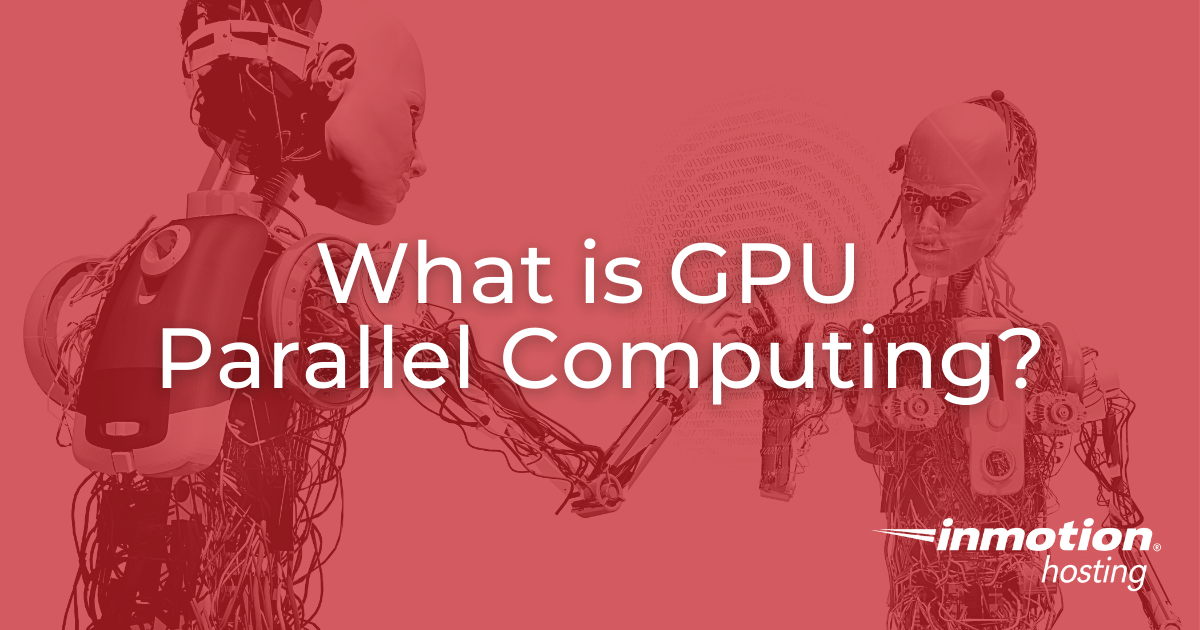 In this article, we will cover what a GPU is, break down GPU parallel computing, and take a look at the wide range of different ways GPUs are utilized.

What is a GPU?

GPU stands for graphics processing unit. GPUs were originally designed specifically to accelerate computer graphics workloads, particularly for 3D graphics. While they are still used for their original purpose of accelerating graphics rendering, GPU parallel computing is now used in a wide range of applications, including graphics and video rendering.

GPU parallel computing makes GPUs different from CPUs (central processing units). You can find CPUs in just about every device you own. Built inside just about everything from your smartphone to your thermostat, they are responsible for processing and executing instructions. Think of them as the brains of your devices.

CPUs are fast, but they work by quickly executing a series of tasks, which requires a lot of interactivity. This is known as serial processing.

GPU parallel computing is a type of computation in which many calculations or processes are carried out simultaneously. This is known as parallel processing and it is what makes GPUs so fast and effiecient.

A CPU consists of four to eight CPU cores, while GPU parallel computing is possible thanks to hundreds of smaller cores.

GPUs and CPUs work together and GPU parallel computing helps to accelerate some of the CPUs functions.

As we covered above, GPU parallel computing is the ability to perform several tasks at once. GPU Parallel computing enables GPUs to break complex problems into thousands or millions of separate tasks and work them out all at once instead of one-by-one like a CPU needs to.

The GPU parallel computing ability is what makes GPUs so valuable. It is also what makes them flexible and allows them to be used in a wide range of applications, including graphics and video rendering.

What Are GPUs Used For?

GPUs were invented to improve graphic rendering, but after some time, people started to realize that GPU parallel computing could also be used to accelerate a range of scientific applications, not just graphics rendering. This made them more flexible and programmable, enhancing their capabilities.

Now, GPU parallel computing is used for a wide range of different applications and can be helpful for any device that needs to crunch a lot of data quickly.

As we know, GPUs were created to accelerate graphic rendering, which makes them ideal for advanced 2D and 3D graphics, where lighting, textures, and the rendering of shapes have to be done simultaneously in order to keep images moving quickly across the screen.

This means that games can be played at higher resolution, or at faster frame rates, or both.

GPUs have been valuable for gaming servers since their inception, but that value is only increasing as we see a rise in virtual reality gaming.

GPUs are still used to drive and advance gaming graphics and improve PC workstations, but their wide range of use has also led them to become a large part of modern supercomputing.

Their high-performance computing (HPC) ability makes them an ideal choice for machine learning, which is the science of getting computers to learn and act as humans do. This can also be known as deep learning.

With machine learning or deep learning, the goal is to get computers to improve their learning over time in an autonomous fashion. This is done via feeding them data and information in the form of observations and real-world interactions.

GPUs are useful for machine learning because they can provide the bandwidth needed to accommodate large datasets and enable the distribution of training processes, which can significantly speed machine learning operations.

With this ability to perform many computations at once, GPUs have become accelerators for speeding up all sorts of tasks from encryption to networking to even artificial intelligence (AI).

Prior to the invention of GPUs, graphic designers, video editors, and other visually creative professionals were forced to endure extremely long wait times for video rendering.

Not only would the visual elements take a long time to render, but the resources required for the rendering would often slow down a device’s other functions in the process.

Thanks to the parallel computing offered by GPUs, rendering a video or high-quality graphic is now much quicker and requires less of a device’s resources.

This improves the speed at which graphics are rendered and enables users to do more while the rendering takes place.

Thanks to their ability to process loads of information quickly and at once, GPUs are now becoming a popular choice for executives. In fact, GPU parallel computing is now present in a lot of data centers where CEOs and CTOs are finding that GPUs provide a host of advantages over their CPU counterparts.

For starters, GPUs are more powerful than CPUs. They have more cores, more computing power, and the ability to run several calculations or processes simultaneously instead of one at a time like CPUs.

Because GPUs can execute several tasks at once, they are typically more efficient.

That means when it comes to data centers, they will require far less floor space than CPUs.

All of these advantages that GPUs deliver can be applied to storage, networking, and security functions, making them perfect for the flexibility and scalability needed to accommodate growing data centers.

As data centers grow, GPUs enable them to expand exponentially to provide a high-density, low-latency experience without having to make massive hardware upgrades.

The introductions of GPUs and their ability to run several calculations and processes at once have changed computing as we know it.

While CPUs continue to be useful for serial processing, GPU parallel computing opens GPUs up to a multitude of uses.

Originally designed to speed up the rendering of graphics, it wasn’t long before people noticed that their parallel computing ability could be used for so many other purposes and applications.

Now, GPUs are utilized regularly to enhance things like gaming and machine learning, as well as in data centers, where they improve power, speed, scalability.

In short, GPUs have become essential and will continue to be used in areas where more computing power is needed.

Be on the lookout for new GPU Servers on our Flex Metal Private Cloud Product!

Looking for private cloud, infrastructure as a service, or bare metal cloud solutions? A Flex Metal Cloud is a powerful private cloud solution that gives you the security and performance you need to successfully run your business. Learn more about the Private Cloud IaaS inside of Flex Metal.

Sam is a Content Marketing Writer at InMotion Hosting. He covers a wide range of topics but focuses primarily on WordPress, thought leadership, and help articles for bloggers and small businesses.