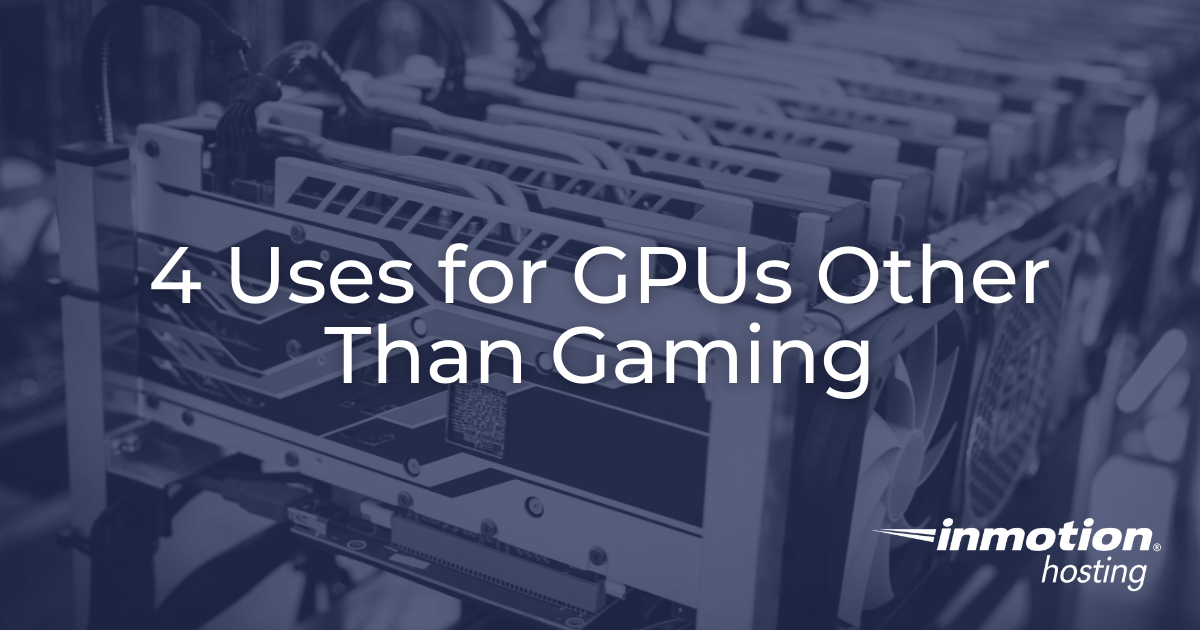 While Graphics Processing Units (GPUs) are commonly used to render computer graphics for video games, there are a number of uses for GPUs other than gaming. GPUs can be used for video editing, 3D graphics rendering, and much more. With a high processing throughput, GPUs can process more data than their Central Processing Unit (CPU) counterparts, making them uniquely suited for highly demanding tasks such as machine learning and cryptocurrency mining.

Uses for GPUs Other Than Gaming

Modern graphics cards support software used for video encoding, a process by which video data is prepared and formatted prior to playback. Video encoding is a resource intensive process that can take a prohibitively long amount of time to complete if only a CPU is used. With a GPU, video encoding can be done relatively quickly without overburdening system resources. It is important to note that encoding high-resolution video can still take some time to complete even with a high-powered GPU at your disposal. With video formats supporting higher and higher resolutions, an adequate GPU is an essential tool for the modern video editor.

While 3D graphics are commonly used for video games, they have also become increasingly used in other forms of media such as films, television shows, commercials, and digital art displays. Similar to video editing, the creation of high-resolution 3D graphics can be a resource intensive and time-consuming process, even with state-of-the-art hardware.

Modern film studios often depend on GPU technology to generate ever increasingly lifelike and dynamic computer images, making the hardware a vital part of the movie-making process. Digital artists employ GPU-enabled computers to create abstract displays that could not be created in physical space, allowing them to create works of art unlike anything seen before. With the proper combination of hardware performance and artistic vision, GPUs can be a powerful creative resource for any media operation.

One of the lesser known applications of modern GPUs is machine learning. Machine learning is a form of data analysis that automates the construction of analytic models. In essence, machine learning involves systems that use data to learn, identify patterns and make decisions independent from human input. Due to the highly resource-intensive nature of machine learning, GPUs are an essential component.

Considered a building block of artificial intelligence, machine learning is a computationally demanding process as it necessitates the input of large volumes of data for analysis. This analysis is performed by software known as machine learning algorithms. These algorithms then build models based on what is called training data or sample data. The resulting models are then used to form predictions or make decisions without any need for human input. This methodology has seen widespread implementation in fields ranging from medicine to email filtering, making machine learning a crucial yet frequently overlooked aspect of modern data infrastructures.

While blockchain technology has uses outside of cryptocurrency, blockchains are generally involved in mining. This is most commonly seen in the context of the Bitcoin cryptocurrency, but blockchains exist for other currencies as well and the mining process can differ depending on the currency in question.

When it comes to mining Bitcoin, the process involves the dedication of hardware resources to the creation of blocks in the Bitcoin blockchain. The more blocks added to the blockchain, the more Bitcoin is generated. This comes at the cost of system resources and electricity, making efficiency key when engaging in cryptocurrency mining. The high throughput and relatively low energetic requirements of GPUs makes them uniquely suited to performing these high-demand tasks.

Now that you are familiar with some uses for GPUs other than gaming, you can better decide if a GPU is right for your Private Cloud Infrastructure.

Enjoy the on-demand scalability of a public cloud with an enterprise-grade, open-source full provisioning solution of a private cloud with Flex Metal Private Cloud.

Thoughts on “Uses for GPUs: 4 Reasons Other Than Gaming”