I had a great week at OSCON 2013 last week from 7/22 – 7/26 sitting in on a bunch of great talks, and meeting a bunch of awesome people. The Open Source Conference by O’Reilly now in its 15th year, is one of the best places on the planet for learning new skills and talking about ways to better understand how the hottest emerging open source technologies are going to impact how we live, work, and do business.

Create more value than you capture

On Thursday 7/25 I had the chance to sit front and center for the man himself Mr Tim O’Reilly for his talk on “Create more value than you capture“. His talk covered ways to build a sustainable business and economy, and how to stay away from the prevailing mentaility that a mainstream business should be most concerned about short term gains, which typically leads to long term loss. 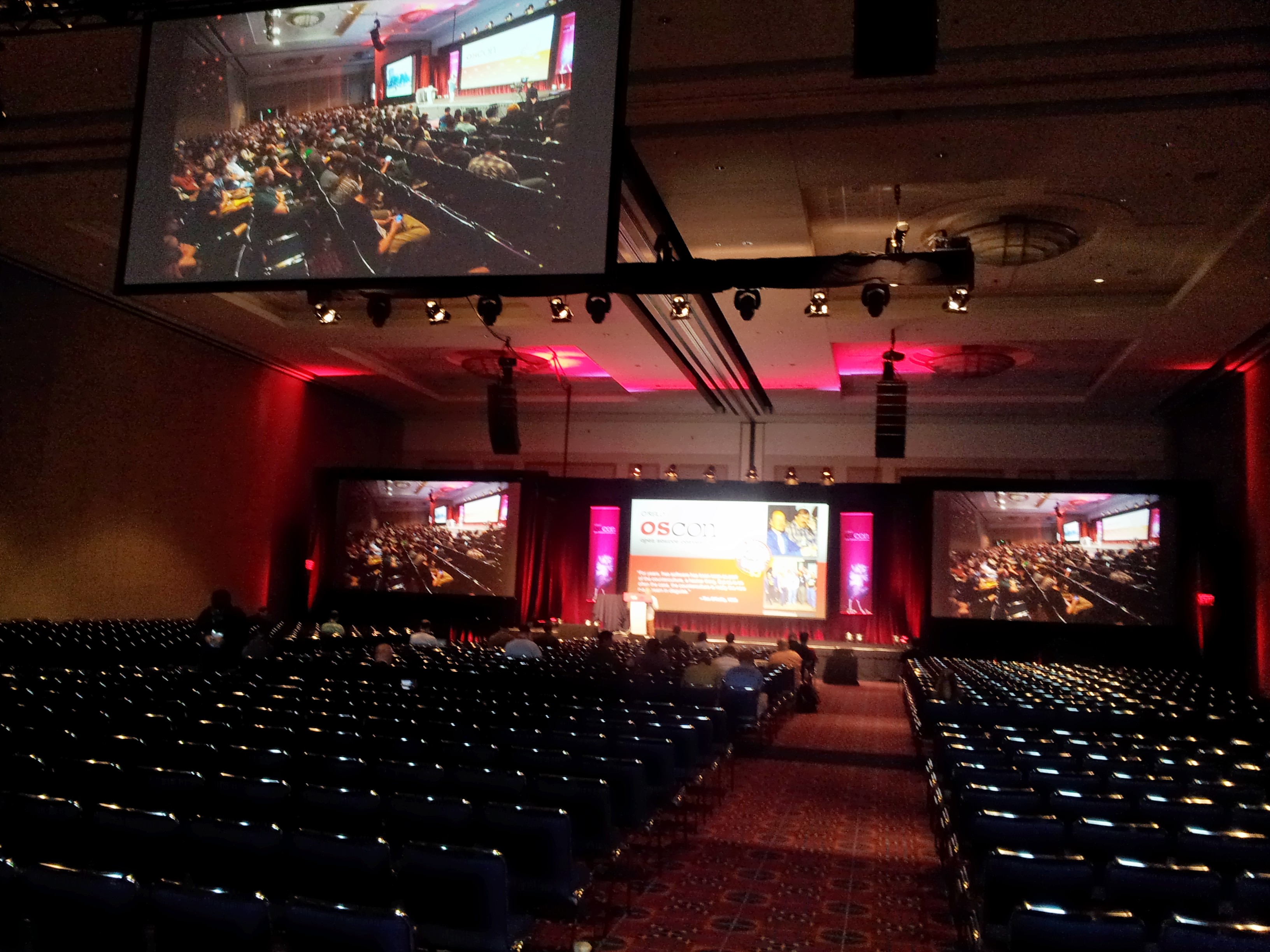 He started with a great quote from Edwin Schlossberg “The skill of writing is to create context in which other people can think.” This was tied in with Tim’s own personal experience on starting with the O’Reilly books in a time when the Internet was not seen as a viable platform for business. That also led him into another great quote of his own with “The Internet was built with O’Reilly books”.

That last one was a pretty bold statement, but it made sense to me. Most of the early adopters of new Internet technologies were trying to create things for an economy that didn’t really exist yet, using information at the time that really was only prevalent in book, mostly O’Reilly ones. It really worked in their favor that O’Reilly hadn’t focused on the short term gains of writing about stuff that was already out there and selling well, but instead investing in the roadmap and groundwork for the future of what could be. 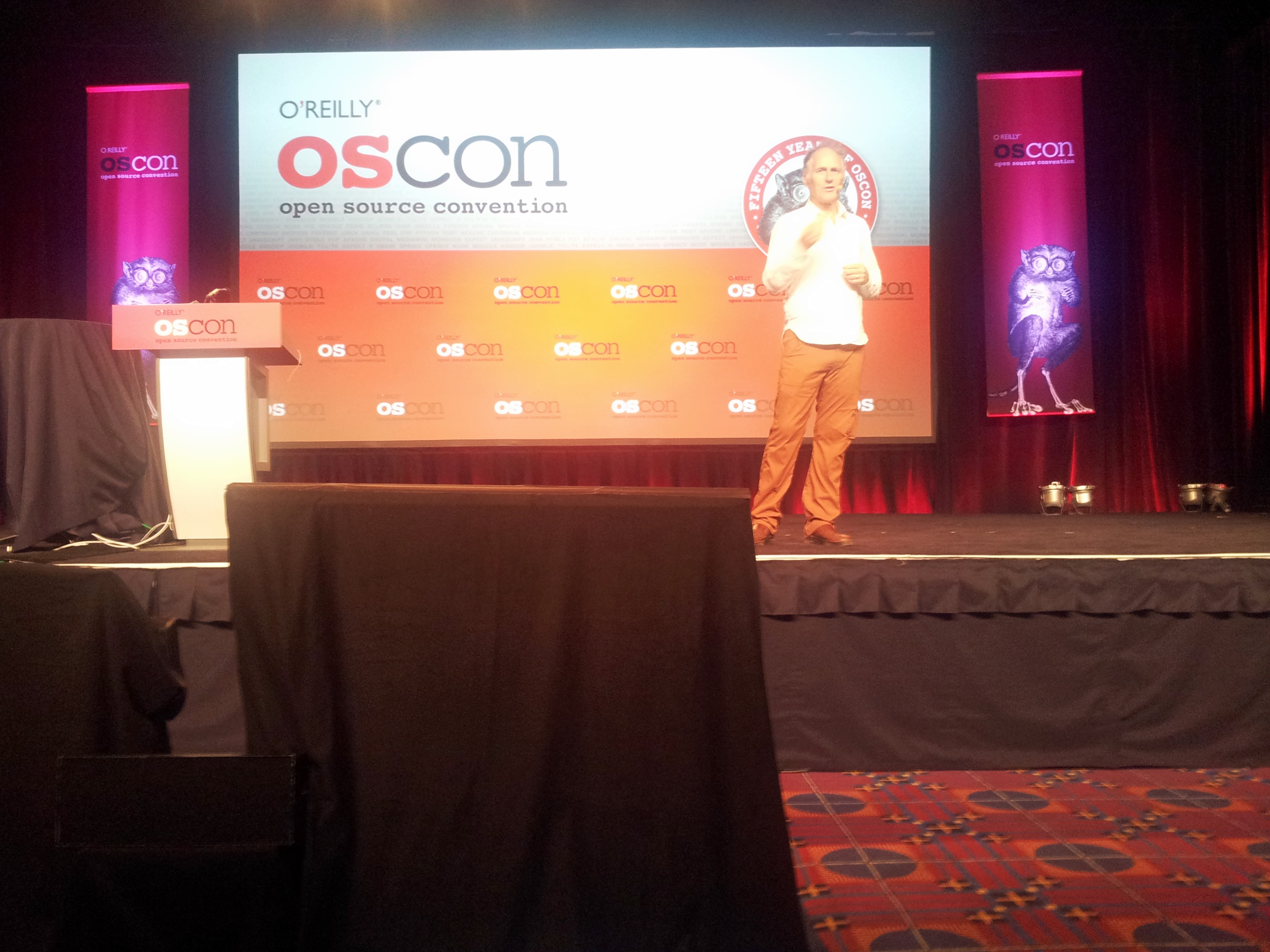 The talk then switched over to Tim talking about particular projects he was currently interested in and following, and the main one that he kept going back to was Square with their credit card service for Smartphones and registers, and this was some of the key points he took away from the project.

Your mobile device already knows so much about you, such as your location, so don’t require a user to take extra steps to check in. Context aware programming should become more and more of a standard way of doing things to fully take advantage of the data available for your applications.

Lesson #2: Get creative with hardware, not just software

Sometimes not everything can or should be tackled at the software level of design, Square for instance used a bit of hackery for their credit card reader dongle so that it could go in the audio port of the device.

Lesson #3: Build “Software above the level of a single device”

Nowadays we are not restricted to a single device and applications should be written as such. For instance if you ask the question how many people use Linux, or how man people use Windows? You’ll get a varied response depending on where you’re asking, but if you ask how many people use Google? You’ll more than likely get a large amount of users across both operating systems.

When data can be gathered and then analyzed to improve the users experience this is typically a win-win for both the company and the user of the software.

We are going through a shift from information retrieval, to information fabric. Having the information and the tasks at hand easily coming into our world based off previous requests for information, or based off other current knowns about us or our environment.

Tim started off this lesson sharing a quote from J.C.R. Licklider from “Man-Computer Symbiosis”:

“The hope is that, in not too many years, human brains and computing machines will be coupled together very tightly, and that the resulting partnership will think as no human brain has ever thought and process data in a way not approached by the information-handling machines we know today”

In 2005 we had the DARPA Grand Challenge for driver-less cars, and while the Stanford University team won and completed the 7 mile course, it wasn’t as publicized that it took nearly 7 hours. 6 years later Google has driven hundreds of thousands of miles, and in regular traffic conditions with its Google autonomous vehicles.

Peter Norvig, Cheif Scentist for Google when asked about how this was possible responded with “We don’t have better algorithms. We just have more data.” That data he was referring to came from the Google Street view cars driven by humans, while driving they collected very detailed informaiton that was then stored in Google’s collective brain to later help the AI of the driver-less cars navigate with ease.

He went on to say it’s a very hard AI problem to detect if a street light is present at an intersection, but it’s almost a trivial problem once you know the street light is there if it’s red or green.

Services that focus on keeping users in the loop and don’t leave them hanging tend to always do well. Tim as an example explained how the Uber private driver service had a leg up on simply calling a taxi for transporation as it notifies the user of an estimated time of arrival, they can check on their phone where the driver is at on a map, and they receive a txt when the ride has arrived.

This lesson on which the talk was named after covered how when you focus on bringing more value to a sector, instead of just trying to capture and capitalize on it, you typically grown the economy all the while making yourself more profitable as well.

Using Square as an example again, Tim mentioned how the creator was trying to allow small business owners to easily be able to take credit cards to help their business succeed. Some other examples he gave where from Etsy.com and AirBnB.com and KickStarter.com all services trying to empower smaller companies or indivduals to help provide services. The general common place of all these companies was that if you help other people become successful by providing value to them, you will in turn become successful yourself.

Lesson #9: Work on stuff that matters

This was a short lesson, but basically just the idea that when you’re working on big ideas, and stuff that matters in the world, the quality of your work and life can be greater. He also had a great quote from former FaceBook employee Jeff Hammerbacher saying “The best people of my generation are trying to figure out how to make people click on ads.”

Lesson #10: Idealism is the best marketing

Idealism isn’t only the best principle for your business and for the world, but it is also the best marketing available. This lesson tied in nicely with my namesake from the Bible, Jacob, and Tim talked about a poem how the wreslters of the Old testament wresteled with the angels and knew they couldn’t win, but got stronger by doing it:

“What we fight with is so small, and when we win, it makes us small. What we want is to be defeated, decisively, by successively greater things.” – Rilke “The Man Watching”

All in all this talk from Tim O’Reilly resonated very well with me personally. What we are trying to do here on the InMotion Customer Community team falls in line with a lot of the principles Tim covered in his speech. We are trying to add value not only for our own customers, but to the web hosting industry in general.

In a day and age when a lot of web hosts are trying to cut corners to save money, and worried about all sorts of ROI and KPI metrics as a measure of success. We have taken an alternate approach of first making sure that what we’re doing is actually helping people and answering their questions, and that it’s also adding great value to our service that our customers can rely on time and time again.