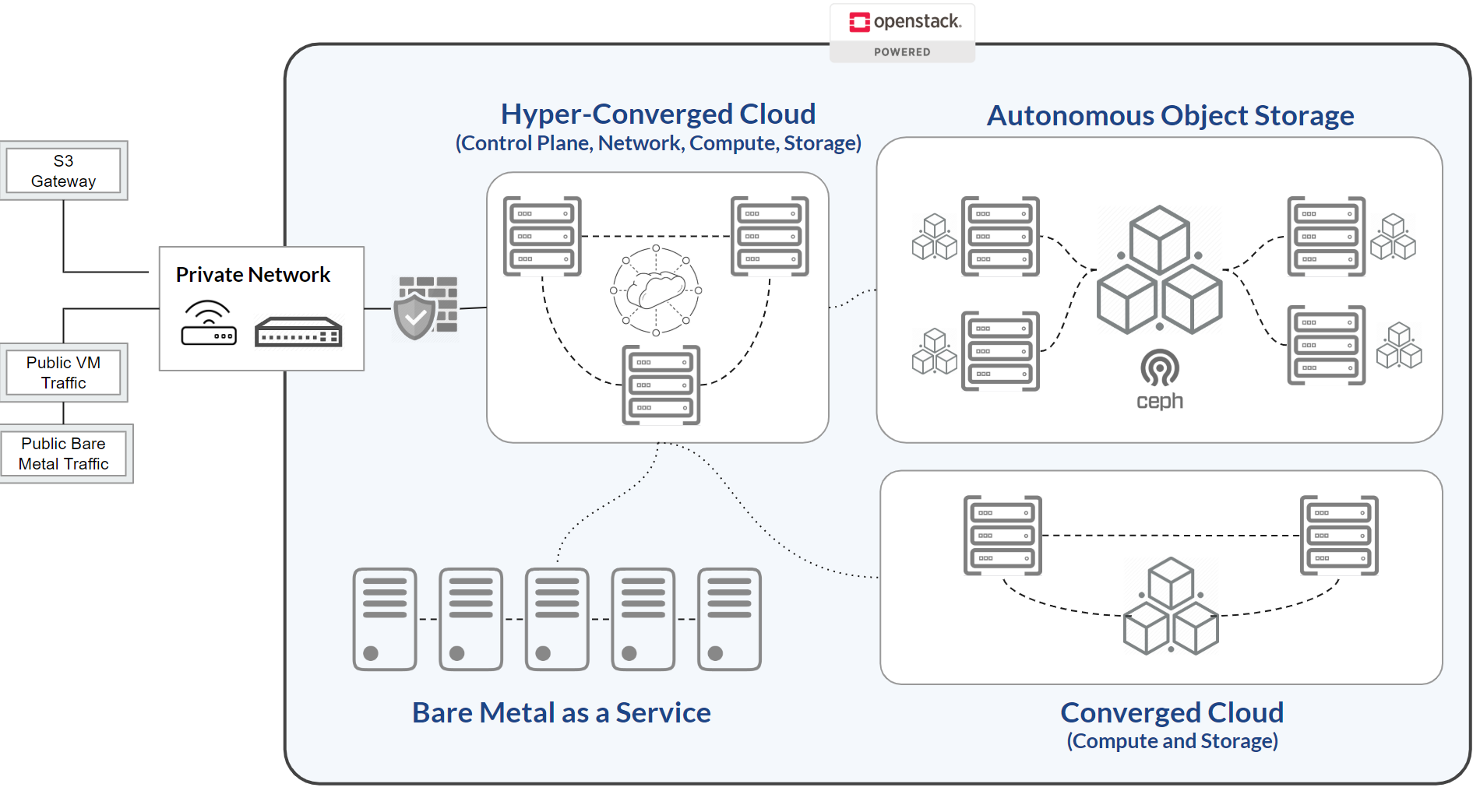 This article is written based on our background with our private clouds created with OpenStack and Ceph. Other cloud systems will have a bit of a different meaning, but you will get the idea.

Some of the other sites attempting to explain this concept focus on something that might be the “older” description of Converged Infrastructure.

It is easier to start with what hyper-converged is, then converged, then stand alone, and then dis-aggregated (to throw another tech jargon word in there) to explain the differences. It also helps to introduce the following “dis-aggregated services”:

So, with that – Converged vs Hyper-Converged:

Of note: “Dis-aggregated/Traditional” = All major Services are on autonomous hardware

It is also useful to explore how we recommend sizing your Flex Metal hyper-converged cluster due to the resource needs of the control plane.

More explanation is possibly needed, so another way to look at it.

All of the stand alone servers above represent Services that are a required part of a modern infrastructure. But many of those Services do not require a lot of resources when part of a “small” deployment. To further complicate it, to have those Services be redundant, like any good system admin will advocate for, you would need 2 or 3 of each. So now you would have several servers that do not require a lot of resources.

In this case, our 3 server Ceph cluster is replication mode for data protection. This is typically used for data that is primarily for block storage vs object storage. To have Ceph run as a large object storage system you would typically run it on stand-alone servers with things like Erasure Coding for storage efficiency.

In most Converged vs Hyper-Converged discussions, the term “Converged” will mean that Compute and Storage resources are on the same physical box. Lets call this box “Converged 1”. In our hyper-converged infrastructure OpenStack world, this means the virtualization software – KVM – will be used to allow virtual machines to be created using the RAM and CPU resources on Converged 1.

In addition, one or more of the hard drives (in our case an NVME or SATA SSD) on Converged 1 will be part of another software system called Ceph. The “data storage” part of a Ceph cluster is resident on Converged 1 and will manage that specific SSD. As Ceph is horizontally scalable, there is also part of Ceph that will distribute data to other servers in the Ceph cluster – Converged 2, for example. Unlike the Hyper-Converged case, Ceph’s Monitoring, Object Storage Gateway, and some other Control Plane services do not run on Converged 1.

Our marketing pages cover the specifics of our hyper-converged cloud on our hosted private cloud page, please check it out if you are interested. If you are wondering why this is written from an OpenStack perspective – check out Why is OpenStack Important for Small Business.